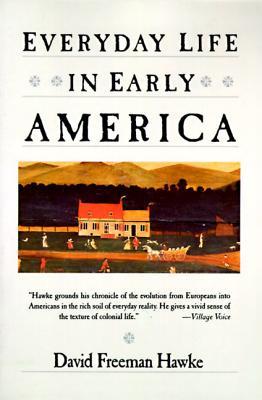 When I picked this book up I thought it would be so dry it would be a struggle to get through – and I was prepared for that when I began to read it. As I got further into it, I realized that – maybe it was dry, but it was written in such a way that, at least to me, was palatable.

I’m interested in the topic for a couple of reasons – a) most history is written about wars and/or famous or infamous people and b) just like any history, it’s hard to see yourself living in that time period. The author quotes Fernand Braudel in the introduction, “the journey backward is a journey to another planet, another human universe.” That’s a good way to put it.

“Many settlers found an ‘early paradise’ in America. The abundance of flora and fauna was awesome. Persimmons, a fruit new to the colonists, grew like ropes of onions and ‘the branches very often break down by the mighty weight of the fruits.’ Wild strawberries carpeted many of the burned-over glades. In the spring ‘herrings come up in such abundance into their brooks and fords to spawn that it is almost impossible to ride through without treading on them.’ Huge turkeys ran in flocks of four and five hundred. Migrating ducks blotted out the sun when they rose from a pond and made ‘a rushing and vibration fo the air like a great storm coming through the trees.'”

In early America, it was very easy to see the benefits of diversity. One example is in early Pennsylvania – the Swede’s brought the log cabin and taught others how to use an ax. The Germans bred big horses that could pull large loads. German craftsman produced a new gun for America – the rifle. Germans and Swedes worked together – to help newcomers to Pennsylvania, when someone needed help clearing a field, to erect log cabins and raise barns. It seemed by bringing their own unique ideas and sharing with others contributed to the colony of Pennsylvania’s success.

It was also easy to see the drawbacks also – the Indians gave the Americans corn and showed them how to plant it and in return they got disease, guns, alcohol, and cotton shirts.

In regards to the “melting pot” or “salad bowl” – most of early America was a “salad bowl”. People generally married people of their same religion or ethnicity. However, the melting pot that America created overnight was with black slaves. Slaves were brought from all over the world and did not share a common language or culture. “Blacks were forced to meld their origins, traditions, and languages into a single American pot.”

“Common hardships put the different races, as well as separate sexes, upon a more equal footing than they would see in subsequent generations.”

Farming was hard. “Clearing the ground” either took or produced a certain work ethic. A farmer was able to clear about 1 to 2 acres per year and a farm in 50 years. Farmers were mostly cutoff from society and for the most part were self-sustaining, meaning they must become a jack-of-all-trades. Every farmer grew corn because it could be used for both humans and animals, was immune to most diseases, and was easy to grow. Farmers wives kept a “kitchen garden” with vegetables for use during cooking.

The early American houses were a little different than we have today. Except for “the hall”, or living room – there were no rooms – no bedrooms, no dining rooms, no bathroom. The hall was used for everything – cooking, eating, working, praying. For a dinner table the colonists used a board which they referred to as “the board”. This is where the term “room and board” comes from. Most colonial families did not have any chairs at the board, but if they did, it was reserved for the head of the family – the “chairman of the board”. Also, forks did not appear until the 18th century and instead of beds they used a “shake down”, a bedroll that could be put away during the day.

Women were important and their grind was grueling. They ran the house and reared the children, but they also became partners with their husbands on the farms – even out in the fields they helped.

Children moved straight to adulthood – no adolescence – the phase did not exist then.

Because the colonists were so spread out, the normal publication of marriages did not work to inform friends and family of a marriage. So local government stepped in to take that on and a marriage license now would be issued by the county clerk to spread the word.

In England, gentlemen (upper class) were only allowed to have guns. In America as the militias started getting setup so that plain people could protect their communities they broke this English tradition – and now, all men had the right to bear arms.

Regarding illnesses, the belief was “Nothing got well of itself, and somewhere in nature existed a remedy to cure every illness.”

One other quote I found interesting was in regards to the Salem Witch Trials in which some people feel that the people convicted did not get a fair trial. Hawke says the accused were tried and “What is and is not fair differs in time and with those that make the judgement.” That’s true and I often wonder what future people will look back on to our current time and think “they did that?” or “I can’t believe they lived that way”.