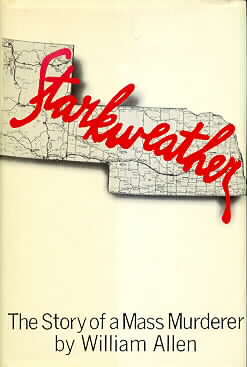 Similar to the last book I read, this book is about a boy from my home state of Nebraska who has some calling to violence. The previous book, Once an Eagle, was a fictional story of a soldier who goes to WWI and WWII and struggles with morality during it. This book, however, was the grim and factual recalling of the actual events that happened back in the 1950’s where Charles Starkweather and his 14 year old girlfriend did not struggle with morality at all as they killed 10 people.

“Hers was really a story of a child in fear of her life for eight terrifying days, a child who believed that not only her own life was in danger but also the lives of her family. She did not know they were dead. if people knew the truth, they would realize that Caril Fugate was no criminal. She was Startkweather’s victim…”

One thing that really struck me about this was the age of Caril Fugate, Charlie’s girlfriend – only 14 years old. It was very hard for me to reconcile that with the events that took place. There are some questions about how much she actually was responsible for — but in any case, she was definitely part of it.

“Nobody but the jury knows how we thrashed out this evidence and tried our best to find her innocent. There was no doubt in our minds as to her guilt.”

– A member of the Jury

The other thing that struck me was imagining how the residents of Lincoln must’ve felt during that week – as there were more and more cases of murder being reported, and they seemed to be pretty random, and they authorities weren’t able to find Starkweather.

“Governor Anderson called about 200 members of the National Guard, and they were cruising the streets with jeeps armed with mounted machine guns. Parents with guns drawn rushed to the schools and took their children home. The city was completely sealed off. A block by block search began… Aircraft were sent up to help look for the Ward’s black Packard.”

Throughout the book the author seems to put some questions in place – who is to blame for someone like this? The parents, the school system, society as a whole? Who knows – maybe everybody, maybe nobody – maybe only Charlie himself. I lean a little that way – but am still uncertain about Caril.